For whatever its worth (27)

He (Dollah) told me that since I have done this, I have become unpopular and he has lost popularity too because of my criticism and the people that have benefited are Anwar Ibrahim and Nik Aziz.

Which is more important now? Revealing the truth or maintaining ones popularity beneath a shroud of deceit? 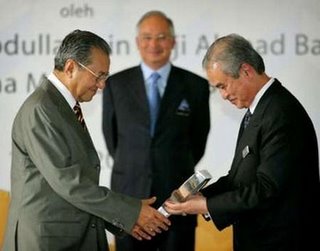 The main issue here is whether Tuns criticism is valid or baseless altogether. If it is valid than Dollah has to stand up and face the music, if it is baseless than Tun has to be responsible for it, slap him with charges of defamation and let him in turn face the music (Dollah can get plenty of tips from his buddy Lee Kuan Yew, who has managed to silence his critics that way).

The issue of ones popularity is not the question here; I wonder why the PM brought it up in the first place.

Why worry if Anwar and Nik Aziz benefits from the criticism if they are false and fabricated?

Hence, I sense that something is indeed stinking into high heaven that the PM now worries that Tuns ongoing assault against him will result into a sharp drop in his popularity. And if that continues of course it will bring much needed political benefit to the opposition.

To Tun, he has no worry at all of his so called waning popularity (according to Dollahs statistics, he said). To sum up he said:

I told hin I dont care if I am popular or unpopular. But if anybody does anything that is damaging to the country and to the Malays in particular, I am going to come out and criticize.
at 5:03:00 PM