Senior enforcement officers have from time to time argued their decisions have nothing to do with politics. So why has Inspector General of Police Musa Hassan lent his face to the Barisan Nasional’s election campaign?This was among the questions raised today by PAS spokesperson Roslan Shahir Mohd Shahir during a press conference at its headquarters in Kuala Lumpur. 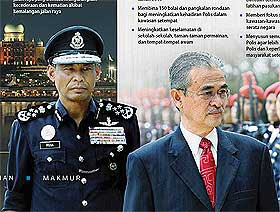 In the recently launched BN manifesto for the March 8 general election, its section on ‘Law and Order’ features BN chairperson Abdullah Ahmad Badawi inspecting a police guard of honour.
Walking one step behind Abdullah is a stern-looking Musa.

"Has Musa given his approval to be a model gracing the BN manifesto or what?" asked Roslan.
"PAS is of the view that the use of the Inspector-General of Police’ photo is misusing the image of the civil service for a political campaign. "Is BN hoping the postal votes of police personnel and officers will be cast for the coalition if it uses the face of the IGP?" he added.

Also featured in the manifesto is Anti-Corruption Agency chief Ahmad Said Hamdan in the manifesto’s section ‘Reducing Corruption and Improving Governance’.
Said is similarly depicted walking behind Abdullah as the latter inspects another guard of honour mounted by ACA officers.

On another matter, Roslan said the party had set aside March 4 and 5 next week for its deputy president and president to take on their counterparts in BN in a debate on their respective manifestos."PAS believes this debate will prove to the world the extent of openness in Malaysia to democracy and the conduct of proper and clean elections," he added.

It follows a war of words between BN and opposition leaders, with those from the former dismissing the latter’s economic plans as ‘undoable’ and liable to bankrupting the nation.The opposition, however, argues that it is the BN’s mismanagement of the economy and corrupt practices that largely contribute to the wastage of public funds.