For whatever its worth (39)

I believe all Malaysian were relieved and happy when the PM remarried recently. The nations number one man fittingly should have a consort by his side.

However both being elderly couple, and both into their second marriage, we expect that they will both not take much time to adjust and settle down. The PM needs a wife and now he has got one, therefore his focus should now shift towards running the nation.

This is not like a fairy tale wedding, where romance and fiesta flutters and goes on and on without end. Im sure our children at home are neither interested nor excited to know more of the romance and honeymoon plans of a couple as old as their grandparents. 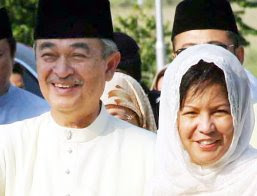 We have given them appropriate coverage, the nation is now informed, prayers have been said, lets just put a stop to it. Let’s just move on. Im writing this not because I am unhappy for the PM, but I personally feel that the local media is over sensationalizing the event that it eventually shifts into over kill gear!