For whatever its worth (38)

When I wrote my article (in Malay) Mayday for Justice I quoted from the former Lord President Tun Salleh Abbas:

We judges must act with responsibility and dignity and we must not conduct ourselves in a manner which exposes us and the system with which we operate to unnecessary criticism.

The issue at hand is the question of integrity involving the judicial circle. Recently in the high profile murder case of Mongolian model Altantuya Shaaribu, we learnt that the AG instructed that the whole prosecution team be replaced at the eleventh hour much to the surprise and dismay of parties involved in the case. 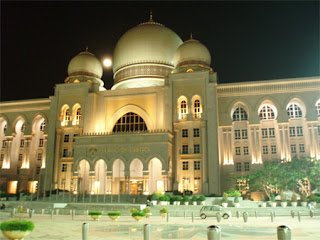 Reason given: the head of the prosecution team was caught socializing with the presiding judge over a badminton game.

And today THE SUN carried the following headline:

Judges must stay on the top, not mix with lawyers
No fraternising

Judges must be really above board and keep to themselves. They must be on a pedestal. To me judges are the property of the nation. They are the national conscience.

Judges conduct must be such that everyone concerned was comfortable that a decision was made not because he was close to any party.

When asked why judges were expected to maintain such conduct, he replied:

Because justice must not only be done but seen to be done.

With this in mind one may want to question, would it be sufficient that only the prosecution team be replaced? Obviously you cant play badminton on your own, you definitely need a partner. If one is found guilty for involving himself in a game, what about the other player?

I believe that justice in this case will be seen to be done, in all fairness, if the person at helm too be replaced, otherwise we will be exposing ourselves to unnecessary criticism and public ridicule.
at 11:59:00 AM