ANOTHER 4 COWBOY YEARS WITH BUSH

Its finally official - the Americans as well as the whole world shall be stuck up with George W. Bush for another 4 miserable years till 2008. If Kerry was to win we wouldn't know what to expect, but now that Bush has won for sure his current policies shall be ongoing and the war against terrorism shall be waged "Bush style" for the next 4 years. 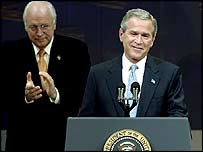 Our Muslim friends in Falluja shall soon be exterminated, Iraqis shall continue to suffer and so shall those in Afghanistan. Iran shall possibly face the same fate now that Bush is still around. Muslim countries around the world including Malaysia shall continue to appease the mighty Bush most of the time at the expense of their Muslim population for fear of losing his favour. For sure those in Guantanamo Bay shall continue to be detained indefinetly.

Meanwhile say what you like, Osama Ben Laden has to be credited for boosting Bush's campaign through his infamous videotape. One wonders if the tape is actually genuine or was actually doctored by the CIA or whomsover at the behest of Bush or perhaps Chenney. For once the President will have to give credit to Osama, a purple heart medal of honour will do! 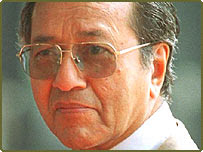 Back at local front, Bush's victory indirectly shows that no one seems to be listening to poor old Dr Mahathir! Remember Dr M tried to make an impression and gain political mileage by signing an open letter to all Muslim Americans urging them to vote for a change and discard Bush. Well Americans and possibly including Muslim Americans have shown that Dr M's words are of no value whatsoever to them.

But during the previous elections when Bush met head on with Al Gore, Dr. M then supported Bush as according to him then Gore was supporting the Reformasi movement. Having said that now we know for certain that not only the Americans but we too have our own wishy washy figure here in Malaysia Boleh land.