Condolence to my Buddhist friends

The head of the Buddhist faith in Malaysia, Dr K. Sri Dhammananda Nayaka Maha Therra, passed away at the Subang Jaya Medical Centre yesterday, the day the country celebrated its 49th anniversary of independence.

Dr Dhammananda was the Buddhist Chief High Priest of Malaysia and Singapore.

Malaysians have always been on the forefront especially when religious tolerance and understanding is concerned. Practicing Muslims, Buddhist, Christians and of other faith could always stand side by side with up most respect and understanding of one another here in Malaysia.

PAS controlled Kelantan is an example of a state in Malaysia, where although the head of state is a staunch Muslim scholar yet religious tolerance is a norm and accorded high respect by the government. Recently a large delegation of Buddhist monks headed by the states Chief Priest paid a courtesy call to the MB. In conjunction with the visit the MB announced that the state had approved a grant to assist the management of Buddhist temples in Kelantan. 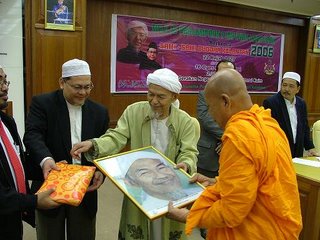 May tolerance and understanding always prevail in this beloved country of ours.

Meanwhile I am sure the death of Dr Dhammanda would be a big loss to the Buddhist community. May a compatible leader be found to replace the great legend.
at 9:19:00 AM